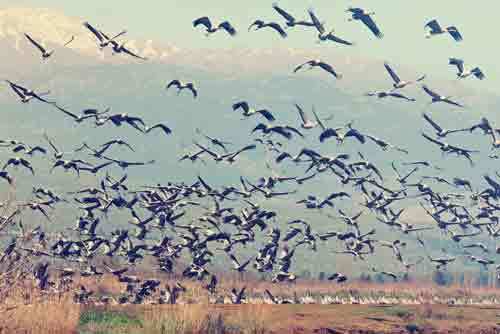 After more than three decades of serving countless satisfied customers, Mazada Tours confidently uses the branding tagline: the Middle East Experts. Our experienced team of experts has put together an unprecedented, albeit it complex and intriguing, tour package aimed at nature lovers and in particular those who love bird-watching.

The mid-winter season is the ideal time for bird-watching in the Middle East, and we have put together a trip that will include bird observation in Israel, Jordan, and Egypt for one week. The ideal synchronicity of mild climates and seasonal bird migration will complement an already outstanding itinerary.

Travelers will fly into Israel‘s Ben-Gurion international airport, and proceed directly to the north for an authentic stay in a kibbutz guest house in close proximity to the Hula Nature reserve. After an in-depth visit to this site, you will cross over to Jordan via the Hussein bridge and proceed to the Azraq Wetlands Reserve in the Eastern desert. After exploration at this spot, you will transfer to Aqaba, then a brief transfer through Eilat en route to the Red Sea Beach at Wadi El Gamal National park. After this majestic venue, travelers will transfer back to Eilat for a return flight to Tel Aviv.

This seven days tour will provide you with unique birdwatching opportunities in fully developed nature reserves, with all the modern amenities to make travelers feel comfortable while going deep into wilderness areas.

The Hula Valley is a rural agricultural region in northern Israel replete with fresh water. It is a major stopover for birds migrating along the Syrian-African Rift Valley between Africa, Europe, and Asia. An estimated 500 million migrating birds now pass through the Hula Valley every year.

The Hula Valley lies within the northern part of the Syrian-African Rift Valley at an elevation of about 70 meters above sea level and covers an area of 177 square kilometers.

The Hula Valley boasts an Eastern Mediterranean climate typified by hot dry summers and cool and wet winters. This is a major draw for the large flocks of migrating birds that stop here to enjoy plentiful food sources and favorable weather. The crops are so desirable that farmers oftentimes suffer major crop damage from the feeding birds.

The Hula Lake Park is located in the southern part of the Hula Valley, north of the nature reserve and distinct from it. It was established as part of a JNF  project. In the early 1990’s, the valley was partially flooded as a result of heavy rains. Reserve managers decided to leave this flooded area untouched. The new location has since served as a rest stop for thousands of migrating birds who pass through the clear skies in the autumn and spring.

The lake encompasses an area of one square kilometer.  There is a smattering of miniature islands that serve as protected bird nesting sites. It has become a major stopover for migrating birds flying from Europe to Africa and back, and this venue has also evolved into a world-class birdwatching site. In 2011, through the use of tagging and tracking technology, Israeli ornithologists confirmed that Lake Hula is the stopover point for tens of thousands of cranes migrating from Finland to Ethiopia every winter. In Israel, farmers set out food for them to keep them from damaging crops near the lake.

The Azraq Wetland Reserve can be found near the town of Azraq in the eastern desert of Jordan. It serves as an aviary oasis for migratory birds. Azraq was established in 1978 and covers 12 square Km. After a severe drought, the springs dried up in 1992 and this served as an unfortunate catalyst for a geographical shift by the migratory birds who were forced to search out a more accommodating landing and rest area. Artificial springs are maintained today in order to maintain this site as an attractive tourist destination.

Migratory birds come from Anatolia, Scandinavia, Siberia, and Africa, stopping in Azraq during the long journey. The partial restoration of the wetlands by RSCN have resulted in the return of several migratory species, such as the hoopoe lark, Cetti’s warbler, the desert finch, and the marsh harrier. Among the 280 recorded migratory species in Azraq are the ruff, avocet, little stint, and the little-ringed plover.Additionally, several birds of prey stop in Azraq, such as the European honey buzzard.

Wadi El Gemal National Park includes five islands which are a breeding ground for 13 bird species. Wadi El Gamal National Park is a national park in Egypt. It is nestled adjacent to a majestic Red Sea Beach. It is 7,450 square km.

The coastal area features coral reefs with 450 species of coral and over 1200 species of fish. It also includes five islands, including Wadi El Gamal Island. These islands are a breeding ground for 13 bird species, and local seagrasses are important sources of food for the endangered dugong and green turtle.

The inland area is home to many animals, including the Dorcas gazelle and the Nubian Ibex.

The park is the site of prehistoric rock art, as well as Ptolemaic and Roman ruins, and the mountain Mons Smaragdus is the site of small mining communities that date back to ancient Egypt. Wadi El Gamal is an IUCN Category II park, established in 2003.

“Do not go where the path may lead, go instead where there is no path and leave a new trail”

Alicia
Originally from the snowy city of Montreal, Canada, Alicia Schneider most recently lived in beachy Tel Aviv. She earned her degree in English Literature & Creative Writing from Concordia University in Montreal. Currently, Alicia is traveling the world and has adopted the digital nomad lifestyle and works as a freelance writer. Aside from travel writing, she also specializes in business technology and software.
Previous postWhy Israel?
Next postFabulous Fountains

imusafirpak
Reply
I am following your blog regularly and got great information. Thanks for an insightful post.These tips are really helpful. Thanks a lot.Keep it up.Keep blogging.!!