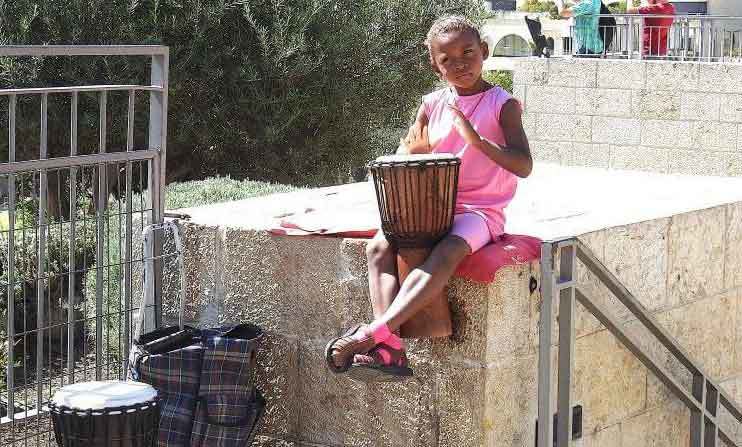 Like any other modern industrialized country underpinned by an ethos of artistic freedom, Israel boasts a modicum of fringe outlets, street performances, as well as musicians of various styles and flavors, jugglers and clowns and the odd panhandler.

As the Middle East’s sole, de facto democracy, coupled with the fact that the country evinces a mosaic culture, renders an inspirational creative cauldron that produces talents that shine with splendor. Many of these artists take to the streets with a deep need to share their gifts to passersby in impromptu venues along the amorphous cityscapes nestled on the coast and in the hills. The change the pick up along the way should not be ignored.

Performances in public places, or Busking, for modest remittance spans all major cultures across the globe. Traces of this ubiquitous phenomena can be observed all the way back to antiquity. Although it would be safe to assume that artistic drive brings these performers to the street, but no one would be naive enough to believe that money wasn’t the prime motivator.

For many musicians busking served as small but steady revenue source since it was the most common means of gainful employment prior to the advent of modern sound technology and storage mediums. Additionally, fringe or street theater was oftentimes the only venue available for struggling actors and playwrights.

Medieval France embraced busking with welcoming arms and even added a dash of artistic legitimacy by coining the terms: troubadours and jongleurs. These birds from the Middle Ages served as the precursors to today’ buskers found anywhere people gather together across all of the world’s major cities. In Romani, the Gypsies are adroit street performers, and the Baltic states have their fair share of public spectacles. The City of London has a prickly past vis a vis the legitimacy and legality of busking.

Historical discussions of busking and street music in the City of London focus on the way in which various residents of the City responded to the ‘street music problem’ of Victorian London. With the growing middle classes, there were those who perceived this phenomenon as a disruption of the quiet tenor of their bourgeois lives.

Street performances can emerge in myriad forms from the protean contortionist to the sly and cunning psychic. However, scholars have pointed out four basic categories of busking which can appear as follows according to the ubiquitous researchers:

Walk-by acts are typified by a musical busker, or a living statue or other act that does not have a distinct beginning or end and the public usually watch for a brief time. A walk by act oftentimes evolves into a circle show if the act is unusual or very popular.

Circle shows are gigs that tend to serve as a catalyst for the gathering of a crowd that forms a circle around the performers. They peruse a distinct beginning and end. This is the true street theater and also includes puppeteering, magicians, comedians, acrobats, jugglers and sometimes musicians. Circle shows can be the most lucrative. Crowds sometimes swarm around the event and are quite capable of obstructing foot traffic.

Stoplight performers present their act right on the crosswalk while the traffic lights are red. This artificial element of tension adds to the attractiveness in this spectacle. As the light remains red, they walk by the cars to get contributions from drivers and passengers. This style includes Juggling, BreakDance, magic tricks and even window washing. The performance and money collection must be brief not spanning more than the time it takes for a traffic light to change. Central and South America are countries where this version of busking flourishes.

Café busking is done mostly in restaurants, pubs, bars and cafes. These venues were the proving grounds for many celebrity musicians. Joni Mitchell, Bob Dylan, and Joan Baez all used this type of venue early in their performance careers.

As mentioned earlier, it would be naive and disingenuous to ignore the financial motivation that drives these performers out into the cold and rain. Buskers collect cash in various ways. There are various types of containers and the collection method varies according to the type of busking that is at hand.

For walk by acts, instrument cases or any other container is used. For circle shows, the performer solicits a contribution at the completion of the show, using guilt as a motivator to encourage revenue.

Legitimate performers as opposed to scammers and panhandlers and the purveyors of the scamming trick, three card Monty usually collect money for themselves. Occasionally, a performer will employ a bottler, hat man, or pitch man to collect money from the audience. The term bottler is a British term. It emerged years ago and originally referred for the bottle, cloth bag combination that allowed for coins to enter the bag but prevent them from being removed with ease.

The Pitch is the actual location where Buskers perform and these can usually be found anywhere large groups of people gather for whatever reason. A modern adaptation of this method is to set up shop near an ATM machine in the hopes of catching a punter just as he has withdrawn funds, an oftentimes mistaken strategy since these machines do not dispense coins.

The primary pitches are Tel Aviv would include The beach promenade, entrances to the Sarona neighborhood. Basel street, especially around Basel square is occasionally used. Allenby street near the entrance to the Carmel Market. Rothschild boulevard and the Nahalat Binyamin are also typical “Pitches”. Other areas include the plaza area in front of the Tel Aviv Cinemateque, Rabin Square, Meir Park, Dizengoff Square and others.

Hit the streets with a camera close at hand and enjoy the wide range of performances that are always available, rain or shine. For more information kindly visit Mazada Tours.

Alicia
Originally from the snowy city of Montreal, Canada, Alicia Schneider most recently lived in beachy Tel Aviv. She earned her degree in English Literature & Creative Writing from Concordia University in Montreal. Currently, Alicia is traveling the world and has adopted the digital nomad lifestyle and works as a freelance writer. Aside from travel writing, she also specializes in business technology and software.
Previous postCan Travel Really Make You Healthy?
Next postChrismukkah