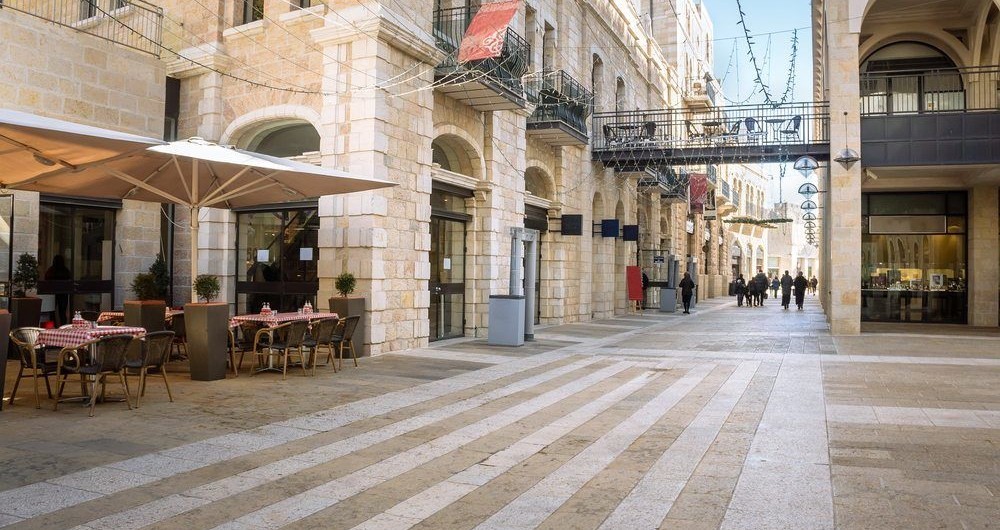 Mamilla was one of the first “modern” neighborhoods developed outside of the walls of the Old City of Jerusalem in the 19th century. After Israel’s independence and until the Six Day War, this area served as the armistice line between Israel and Jordan and extensive damage was done here due to heavy Jordanian shelling. However, the Israeli government eventually approved an urban renewal project for Mamilla, apportioning land for residential and commercial zones, including hotels and office space. The Mamilla Mall opened in 2007.

After the Six-Day War, Jerusalem’s municipal borders were expanded to include the OldCity and beyond. Many buildings in the Mamilla neighborhood were in a horrible state of disrepair from conflict and neglect. Several historic buildings were even condemned by the municipal authorities. One was the Stern House, the famous venue where the founder of Zionism, Theodor Herzl, stayed during is only visit Israel in 1898. However, preservaton activists filed civil suits in Israel’s Supreme Court which served as a catalyst for saving and preserving this historical landmark.

The $150 million Mamilla shopping mall, an open-air promenade constructed with Jerusalem stone, has been billed as a luxury shopping destination in the style of Los Angeles’ Rodeo Drive. There are some 140 retail businesses, including international brand stores and trendy upscale restaurants and cafes. You will also find one of Israel’s most luxurious Hotels, The Mamilla Hotel, which was constructed at this site. It offers the finest in hotel hospitality for discerning travelers.

This promenade is called the “Arlov Mamilla Avenue”, and its wide expanse not only serves as a convenient postern to the OldCity’s Jaffa Gate but has been utilized for art and sculpture exhibitions. Currently, the organizers of “Muse” – Israel’s largest outdoor sculpture exhibition located here, have announced that following its success, they will be extending the exhibition until December 2012 while adding 20 additional sculptures to the current 140.

The works of art on display are for sale to the general public. Each piece of artwork will display a price tag giving the artist’s name and contact information, in both Hebrew and English. If you visit Jerusalem, you should definitely view this free exhibition.

Alicia
Originally from the snowy city of Montreal, Canada, Alicia Schneider most recently lived in beachy Tel Aviv. She earned her degree in English Literature & Creative Writing from Concordia University in Montreal. Currently, Alicia is traveling the world and has adopted the digital nomad lifestyle and works as a freelance writer. Aside from travel writing, she also specializes in business technology and software.
Previous postTouring Haifa
Next postVisiting Neighbors