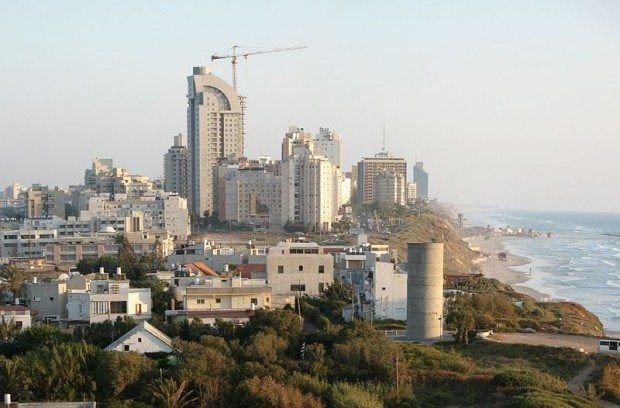 Netanya, Israel’s pristine coastal community, lies just north of Tel Aviv on the Sharon coastal plain. Netanya’s primary tourist attraction would obviously be the superb quality of the beaches. They extend along the entire western border of the city, some 14 kilometers, and this has served as a catalyst for Netanya’s growth as a major tourist destination.

These beaches are unique for a variety of reasons. They are bordered by a rocky escarpment that reaches a height of some 20 meters in places. These cliffs have been enhanced by the development authorities and include a long promenade overlooking the sea.  This promenade constitutes part of the “Israel Road” – a marked walking path that extends the entire length of the country from Kibbutz Dan in the north to Eilat in the south.

What started out as a small agricultural village with 5 settlers back in 1929 has now grown into a thriving city of some 200,000. Netanya was named after an American businessman and philanthropist – Nathan Straus – a co-owner of the renowned Macey’s department store. Ironically, he was chosen by the founding fathers due to his reputation as a generous donor, but when he was approached by them for a donation, he declined, stating that he had no further funds for charity, but the name remained.

Modern-day Netanya has all of the attributes of a contemporary resort city augmented by commerce and light industry.  It has dozens of hotels and guesthouses, romantic cafes, and restaurants offering a complete collection of culinary delights ranging from local, to Asian and continental. Fashion lovers will find all they need in the plentiful shopping centers and boutiques.  Festivals and other events are held in Netanya throughout the year, and this city has evolved into a preferred events venue.

In addition to the enchanting beaches, Netanya has an interesting selection of attractions to offer its visitors.  Tourists can enjoy a unique collection of museums and galleries. The Um Khaled Khan village dates from the Mamluke period, and adjacent to this there is a 1,000-year-old sycamore tree.  You can explore Yemenite ethnicity at the PninatShabtaiMuseum. Netanya has always been synonymous with diamonds so a visit to the DiamondCenterMuseum is a must.  Don’t miss the miniature model of an African diamond mine.   The Well House covers the early history of Netanya and is one of the oldest structures in the city. Don’t miss Netanya on your next tour to Israel.