The Jesus Connection: The Influence of Angels on the Birth and Early Childhood of Christ

The Jesus Connection: The Influence of Angels on the Birth and Early Childhood of Christ 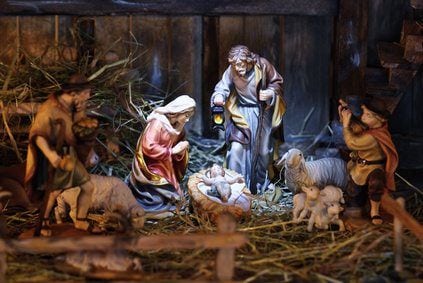 Since Jesus was born in the Holy Land and spent most of his life in Israel, we are offering our readers a brief, three-part overview of his life and ministry. Jesus’ life is wrapped in mystery and conjecture because historical references to his machinations are few, and the sources that we have are a bit sketchy. The primary source for tracing Christ’s life would obviously be the Gospels, and in the main, the books of Mathew, Mark, and Luke and to some extent John. There are other sources which will also me mentioned.

Jesus Christ was born circa 6 B.C.E. in Bethlehem. As mentioned above, our primary source of information is the New Testament which is a theological document and not a historical recounting of the story. These are not biographies in the modern sense of the word, but a certain ethos has emerged from these accounts. Many have adopted the view that they are in fact historical accounts and believers from around the world believe this is so.

In Mathew and Mark, we learn about the virgin birth of Jesus. Mary was engaged to a fellow named Joseph, but they were not married. According to the accounts, the Angel Gabriel appeared to Mary and informed her that she would have a son named Jesus and he would be the Son of God. The NIV Bible states in Luke 1:27-35: “In the sixth month, God sent the angel Gabriel to Nazareth, a town in Galilee, to a virgin pledged to be married to a man named Joseph…” And this is how it all began.

However, Jesus’ birth and mission, death and resurrection were all prophesied beforehand in the Old Testament according to traditional Christian readings of the Tanach. Evangelicals are quick to point out the passages that signal the imminent arrival of a Messiah. Context is very significant for all interpretations and this would be the case here as well. It is important to note that the first Christians were all Jews and that Christianity was actually an exclusive Jewish cult for many years.

Jesus is known as “Jesus of Nazareth” since this is where his family resided. Just prior to his birth, Caesar Augustus decided to make an empire-wide census which included the population of Israel. People were required to return to their ancestral home and this is what brought Joseph and Mary to Bethlehem in the southern region of Israel known as Judea. This is a very key part of the Messianic prophecy as described by the Prophet Mica since the Messiah is a descendant of King David who ruled millennia prior to Jesus’ birth and was also born in Bethlehem.

Joseph and Mary arrived in Bethlehem right before the birth, and a star appeared over the city. Scholars have debated the scientific validity of this supernatural light that served as a harbinger of the birth of Christ and the coming of a new king. It is interesting to note that Chinese astronomers recorded a star-like light that hovered over the Middle East some 2,000 years ago, roughly coinciding with estimated date of Christ’s birth. Believers obviously have no doubts, but this correspondence is interesting indeed and refutes the claims of skeptics. It is also a known fact that wise men from the East traveled to Israel to witness the birth of a new king.

King Herod the Great was a Jewish King appointed by the Romans to rule over Israel, and when he learned of these visitors from the East who had come to Israel to worship the new King, he was outraged. Herod was known for his ruthless and brutal rule, and immediately issued an order that all newborn infants in Bethlehem were to be executed in the hopes that he would destroy any competition to his rule and the throne.

At this point, the Angels figure very prominently in the story once again. An Angel appeared to Joseph and warned him of the imminent danger. Therefore, Joseph and Mary fled to Egypt, just as many other figures in the Bible had done before them. Egypt figures prominently in Biblical history as a place of refuge for the Jews when they were faced with dangers and famine in the Holy Land.

It is believed that Jesus remained in Egypt until the demise and death of King Herod. Joseph feared to return to Bethlehem since it was near the seat of government in Jerusalem that was now ruled by Herod’s son, Herod Archelaus. Therefore, they decided to return to the Galilee region in the North and resettled again in Nazareth.

Our next historical reference to Jesus’ life takes place when he is 12 years old, and he and his family travel to Jerusalem for the feast of Passover. After the feast, Jesus wandered off, and Joseph and Mary went on a desperate search to find their son who had disappeared. Jesus had simply gone to the Holy Temple where he engaged in scholarly debates with many of the local scholars who were mesmerized by the depth of knowledge expressed by such a young boy.

Jesus’ parents finally caught up with him in the Temple courtyard, and this is where the famous quote from the Gospel of Luke appears where Jesus is surprised that his parents were searching for him, claiming that he had simply sojourned to the Temple and was naturally drawn to his Father’s House. This is the point where the story becomes a bit of a mystery since there is no real historical recounting of Jesus until he is baptized around the age of thirty.

Our next segment of this three-part historical exploration of Jesus’ life will examine many of the controversial theories about where Jesus went during this period. We will present you with recently discovered information that will point to explanations that have never before been posted vis a vis this most intriguing segment of the mysterious nature of one of the most prominent figures in all of the mankind’s history. Stay tuned.

Alicia
Originally from the snowy city of Montreal, Canada, Alicia Schneider most recently lived in beachy Tel Aviv. She earned her degree in English Literature & Creative Writing from Concordia University in Montreal. Currently, Alicia is traveling the world and has adopted the digital nomad lifestyle and works as a freelance writer. Aside from travel writing, she also specializes in business technology and software.
Previous postTop Ten Indoor Activities in Israel When it Rains
Next postThe Silent Years