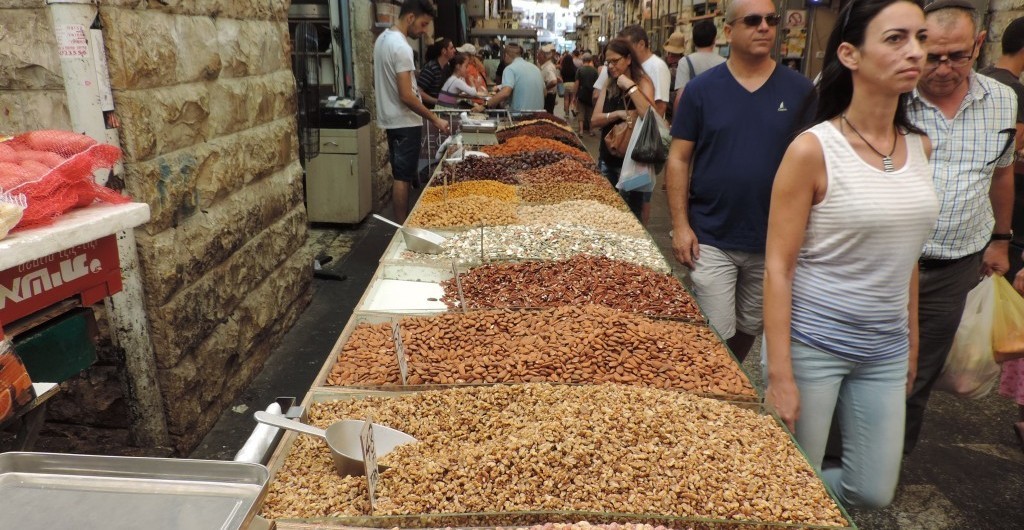 Mahne Yehuda or the Shuk (Market) is Jerusalem’s traditional outdoor bazaar. It could be likened to an American farmer’s market, but it is much much more. Years of tradition have seeped into the narrow alleyways and quaint corner bazaars. Visitors will not only find a plethora of foodstuffs, but also a wide variety of unique, ethnic restaurants, durable goods, as well as urban entertainment.

There are those who make a weekly pilgrimage to this spot on Fridays to provision for the Sabbath, and there are tourists who take tours, and residents of the nearby Nachlaot neighborhood who have the pleasure of purchasing fresh food every day. There is something for everyone in this renowned landmark that sprawls across the western portion of the city center.

This Mahne Yehuda market is not just an oriental shuk, but rather an old neighborhood that started out with a meager 162 homes in 1887. However, Mahne Yehuda was called by many different names prior to receiving its current moniker, which was the first name of one of the Navon brothers who founded the place. In the 19th century, the name changed to Shuk Beit Yakov. This version provided a venue for Arab merchants who sold goods to those living outside the walls of the Od City. The market expanded as new neighborhoods developed.

In their typical manner, the Ottomans allowed the market to expand in a haphazard and unorganized manner. This mess was cleaned up during the British Mandate when permanent stalls and roof coverings were added.

In 1931, twenty merchants formed what is known as the Iraqi market in the area and the Shuk took on its current name Mahne Yehuda, after the neighbourhood that grew up around it, and the Iraqi market is on the street bearing this name today.

In 2,000, the Shuk got a major makeover with new infrastructure and amenity improvements. This was in part due to the tragic terror attack which struck the market in 1997 when 23 innocent victims were murdered by Palestinian terrorists who planted a bomb during a time when blameless punters were plentiful. These measure were taken in part to improve tourism to the area, and the transformation sparked a new trend for this focal point of retail commerce.

Shuk visitors, like all things in modern times, have transformed, and this transformation has served as a catalyst for alternate avenues of shopping and entertainment. Everyone is always interested in a bargain, and this is part of the reason why shoppers flock to the market for their non-durable goods. However, the younger generation comes to the Shuk in search of entertainment. They want to sit in a trendy cafe, meet up for a first date, attend a music festival or an art exhibition or the latest iteration in the ever changing list of restaurants and other culinary delights.

Another form of transformation is the Shuk’s branding. It has now evolved into a night spot for partying and dating with a copse of quaint little bars and cafes. The Shuk is also a mecca for music lovers with the launching of the “Balabasta” annual music festival which was inaugurated in 2010. The music is augmented by puppet shows and all sorts of fringe drama acts and much more.

Another interesting transformation appeared in the form of the Tabula Rasa project where open concrete walls and other appropriate niches where adorned with artworks created by students and graduates of Jerusalem’s world renowned Bezalel Art Institute.

In the Early days, everyone used to flock to Sima, a landmark grill restaurant on the western border of the market where grilled meats are always complimented by a generous sack of french fries, free of charge. Still there today, and still strong on chips, as they are fittingly called here after the British mandate occupation.

Today, the list of places to eat is long and filled with almost endless variety, offering something special for even the most discerning palate. However, middle-eastern style restaurants are still by far the qualitative leaders on the list, and this is only natural. Diners can also enjoy Ethiopian cuisine, fish and chips, Italian at Pasta Basta, vegetarian, gourmet and more.

Like all major urban municipalities in Israel, the Jerusalem Municipality has invested large sums of money to improve infrastructure, creating renovated spaces which are appealing to tourists and locals alike. The new light train runs right past the Shuk, and many feel that the Mahne Yehuda market is one of the anchor tourist attractions for the city.

Besides shopping for food, clothing, jewellery, souvenirs and other fashionable items, tourists can take various types of excursions and tours in the Shuk. The advent of the internet has not left the traditional Shuk unscathed, and there are many websites and internet offers. One leading attraction is Shuk Bites where you can participate in a self-guided tour and you get a map with a planned route along with food vouchers for food and beverage tastings along the way.

Cooking enthusiasts have been drawn by the so called market cooking tour. Other tours include the wine and cheese tour, classic tour, bakery tour, chef-guided tasting tour, and the Shuk cooking workshop.

If you visit Israel during one of the holidays, you can enjoy the special treat of one of the Shuk’s holiday specialty markets where for instance, you can attend the Shuk Kapparot, just before Yom Kippur, or find your favourite type of Hamentashin for Purim, or doughnuts for Chanukah.

Make sure that you plan an excursion to the Shuk on your next visit to Jerusalem. Contact Mazada Tours for further assistance.

Alicia
Originally from the snowy city of Montreal, Canada, Alicia Schneider most recently lived in beachy Tel Aviv. She earned her degree in English Literature & Creative Writing from Concordia University in Montreal. Currently, Alicia is traveling the world and has adopted the digital nomad lifestyle and works as a freelance writer. Aside from travel writing, she also specializes in business technology and software.
Previous postNew Fragrances Effusing From the Spice Route
Next postTop Ten Beaches in Israel: Beach-combing from The Acadia to the Banana Beach