New Landing in the Land of Israel

New Landing in the Land of Israel 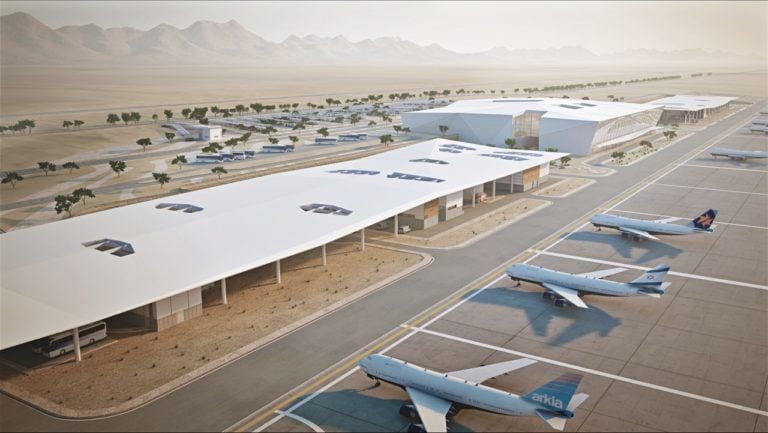 Israel is about to open its newest airport near the Southern city of Eilat. The new Eilat Ramon Airport is slated to open in April 2017 and will replace the two airports currently servicing Eilat – one in Ovda and the other in the town of Eilat proper.

Anyone who has transited through these airports has most definitely noticed that they are aged and in disrepair. The shortcomings are not acceptable to modern travelers, and therefore the move was made for the construction of something better back in 2010.

It is estimated that approximately two million visitors will pass through the new Eilat Ramon Airport in its first year of operation. They will enjoy the wonderful natural sights that add color and ambiance, not to mention comfort and convenience for all those visiting Israel’s “deep south”.

Eilat Ramon Airport is named after Israel’s first astronaut, Ilan Ramon, a famous air force pilot that participated in the bombing of the Iraqi nuclear facility at Osiriaq, who died in the February 2003 Space Shuttle Columbia disaster and tragically, his son, Assaf Ramon, perished six years later when his F-16 fighter jet crashed during a routine training flight for the Israeli Air Force.

The airport is the first civilian airport to be built in Israel since the country first gained its independence in May 1948. All the other airports were already in place and simply underwent renovations. The new airport may have taken six years to construct but the result is truly stunning. It will also open up an international gateway for direct flights from Europe and the Americas.

When the Israel aviation authorities concluded that the two airports currently serving Eilat were not sufficient, they spared no costs when choosing the design team that would create something functional and aesthetic. A committee chose the renowned architectural firm, Moshe Zur and Mann Shinar.

They have created a terminal building that completely melds with the natural atmosphere and seamlessly blends into the surrounding terrain of the Negev desert. The architects claim that their purpose was to create a structure that resembles, in a sense, the large, beige-colored boulders from the local desert. The arrival and departure areas merge into a single hall and are not separated as is usually the case in most modern airports. This provides travelers with a greater sense of wellbeing in the enlarged space.

Many have asked which airlines will be using this airport for regular air service. It’s reasonable to assume that Israel’s domestic airlines, Israir and Arkia, will continue to offer daily flights to Eilat from Ben Gurion Airport and Haifa Airport.

It also seems likely that Monarch Airlines will continue to offer its London-Luton – Eilat route from the new airport. Ryanair, Europe’s largest low-cost air operator, offered low-cost flights between Eilat and four European cities (Krakow, Bratislava, Kaunas and Budapest) during winter 2016 and can be expected to transfer these flights to the new Eilat Ramon Airport for the coming winter season.

However, the possibilities do not end here. The new airport’s 3,600-meter long runway will be big enough to handle Boeing 747 jets and other wide-body aircraft serving long distance routes. This could be a great base for North American travelers looking for direct flights to Israel’s premier resort town – Eilat.

The terminal building features a commercial area of 13,320 square meters, including a wide range of duty-free shops and facilities including restaurants, luggage storage, lost and found, prayer rooms, foreign currency exchange, and a tourist information center.

Alicia
Originally from the snowy city of Montreal, Canada, Alicia Schneider most recently lived in beachy Tel Aviv. She earned her degree in English Literature & Creative Writing from Concordia University in Montreal. Currently, Alicia is traveling the world and has adopted the digital nomad lifestyle and works as a freelance writer. Aside from travel writing, she also specializes in business technology and software.
Previous postSeasonal Secrets: What is Your Next Destination?
Next postWhy Israel?